It's been a while. More than a while I'd say, but today is the day to bring this blog back. I could blame it on lack of motivation. Or lack of time (although I managed to watch the entire Quantum Leap series on Netflix). Or lack of excitement. Or lack of pictures (*see also lack motivation). No matter. Here's are some installments of what we've been up to over the last few months. 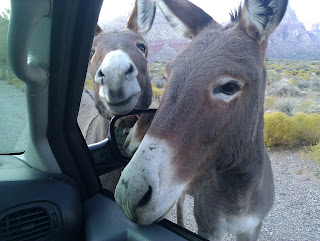 We went to Bonnie Springs and were unimpressed. There was lots of animal droppings and Chris told Aiden it was lucky to step in it. Needless to say "luck" has a whole new meaning in our home. We did meet some friendly donkeys who really liked our mint m&m's. Chris was trying to convince them to drink from a water bottle. It was pretty funny watching him talk to the donkey, "water donkey, whaaater." Kaylee suggested that they were probably burros so he should try speaking to them in Spanish:) 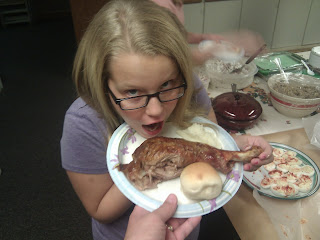 Thanksgiving! In true Hafen style there was an amazing spread, and a lot of it! Ashton was close enough to first in line to get the turkey leg. She was kind enough (or forced) to give it to uncle Aaron. 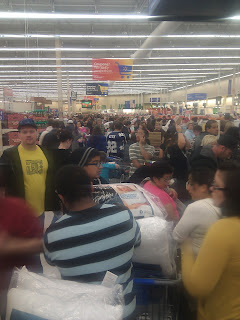 Chris took the kids to a few Black Friday sales, which were not even on Friday. They left our house about 10pm on Thanksgiving to go to Walmart. Even Chris and his love of crowds wasn't prepared for the chaos. Add four tired kids to the mix and you've got yourself a party! I guess Chris hadn't had his fill because he and the kids still went over to Kohls! I sure love that guy, but it's amazing how different our definition of fun is.
Posted by Kristen on Tuesday, February 14, 2012