Not everyone can be Spiderman

I know my stories primarily revolve around Dalin, but let's face it I spend probably 95% of my waking hours with the boy. Currently his super hero obsession is Spiderman. He imagines a world where every one has been bitten by a radio active spider. Where sticky hairs growing out of our fingers give us the ability to climb walls and holding your fingers in just the right configuration will cause webs to shoot from your wrists. The other day after pumping gas I got into the car and noticed a spider crawling on my shirt (crazy right?!?) After a yelp and some flailing hands, I sent that spider flying out the door. Dalin, who was sitting behind me, asked what happened. I told him there was a spider crawling on me. Excitedly he told me, "Quick try and shoot a web!" I don't think he's fully convinced that not all spiders have the ability to give you super human powers. 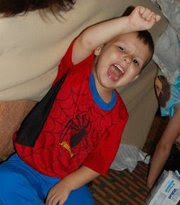 That Dalin he is so funny, and cute too!